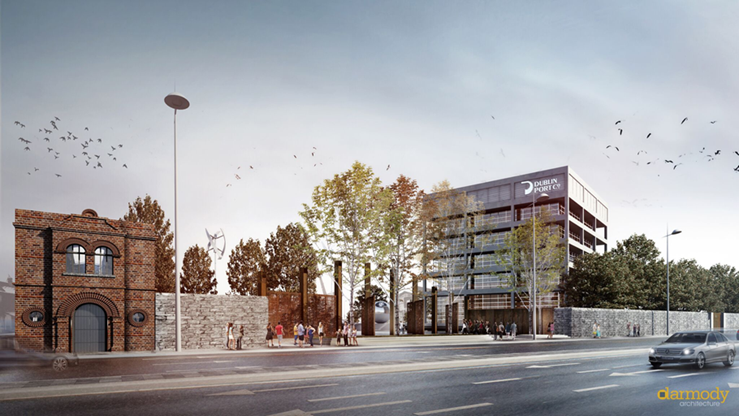 Dublin Port has announced details of a new project to soften its boundaries to the City and provide public realm at Port Centre for the first time in 35 years. This is the largest physical intervention by Dublin Port to reintegrate the Port with the City, as committed to in the company’s Masterplan.

Recognising the potential for public realm and amenity at Port Centre through high quality architectural and landscaping design, the project will significantly soften and enliven the Port’s boundaries with the City.

Enabling works to prepare the site at Port Centre have begun, with contracts having been signed with Wills Bros Civil Engineering to carry out the development. The Mayo based Wills Bros won out in a competitive tender process for the project, which is expected to be completed by September 2017.

Established in 1972, Wills Bros has significant experience of major development projects and has completed schemes for local authorities, airports, and the National Roads Authority, among others. Their team will carry out the construction works at Port Centre as imagined and designed by Darmody Architects who lead a multi-disciplinary design team including landscape architects, CSR and consulting engineers ROD.

The works involve removing a section of the existing old boundary wall to create new pedestrian entry points at Alexandra Road and East Wall Road, identifiable by tall russet coloured structures made from Cor-ten steel, the same material that is used in shipping containers.

The entrances will open out into a new public plaza north of Port Centre, the building designed by Scott Tallon Walker and opened in 1981. At the entrance to the building, a refurbished podium will feature a new sculptural sphere inspired by the spherical-shaped time ball that dropped daily on the top of the Ballast Office at O’Connell Bridge to signal Greenwich Mean Time to passing ships. Made from stainless steel, its surface will mirror the surroundings of Port Centre and provide a new focal point at the precinct. From the podium, visitors will also be able to observe the Port’s operations from a safe distance, as intended by the original architects.

Marking the future entry point to the port will be an historic ten-ton Stothert & Pitt crane, formerly known as Crane 292 dating from 1968 and in use at the port up until the late 1990s. Reassembled and illuminated at the corner of East Wall Road, the 35 metre high structure will be taller than Port Centre when installed and is intended to become a new landmark at the port-city interface. 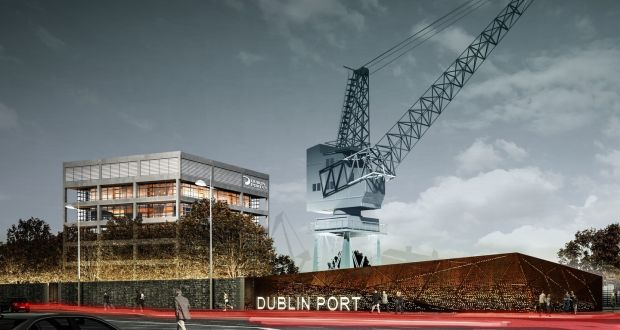 “This exciting new project has been designed with the purpose of opening up Port Centre to the City, using new public realm and maritime-inspired sculptural and architectural design to soften the boundaries between the Port and the City. Port-city integration is a major strategic objective for Dublin Port and at the heart of our growing programme of arts, industrial heritage, sports, community and educational initiatives. As Port Centre physically changes for the first time in 35 years, we hope to move another step closer towards re-establishing the links with the City that existed so strongly centuries ago. Here’s to a new chapter for Port Centre and its place within the City.”

The project builds on recent cultural, arts and industrial heritage initiatives by Dublin Port on the theme of port-city integration, including the reimagining of the Diving Bell on Sir John Rogerson’s Quay, the commissioning of new Irish music for Starboard Home and the launch of a visual arts programme Port Perspectives.

The scheme also fully integrates with Dublin Port’s future plans for a new internal road network, cycle and pathways. Approved by Dublin City Council and scheduled for development, the 3 kilometre route will give pedestrians and cyclists access to the port estate for recreational use for the first time, and includes a perimeter route with vantage points overlooking the Tolka Estuary.