Dublin Port Company (DPC) is lodging an application for permission with An Bord Pleanála for its MP2 Project, the second major capital development project from the Port’s Masterplan 2040. It follows consultation with stakeholders, including the local community, customers, State agencies, Government departments and other public bodies. Public information days will be held in local communities over the coming weeks with details of the proposed development plans on view. The MP2 Project involves an application for a 15-year permission for phased development works within existing port lands in the north eastern part of the port estate.

● A reorientation of Berth 52 permitted under An Bord Pleanála Ref. PL29N PA0034;

● A lengthening of an existing river berth (50A) to provide the Container Freight Terminal with additional capacity to handle larger container ships. These works will include the infilling of

the basin east of the now virtually redundant Oil Berth 4 on the Eastern Oil Jetty;

● The redevelopment and future-proofing of Oil Berth 3 as a future deep-water container berth for the Container Freight Terminal. The future-proofing will facilitate the change of use of the berth from petroleum importation to container handling when the throughput of petroleum products through Dublin Port declines as a result of national policies to decarbonise the economy;

● Consolidation of passenger terminal buildings, demolition of redundant structures and buildings, and removal of connecting roads to increase the area of land for the transit storage of Ro-Ro freight units.

The MP2 Project is the second of three Strategic Infrastructure Development projects required to deliver the vision of Masterplan 2040. This vision sees Dublin Port reaching its ultimate capacity by 2040 with no additional infill of Dublin Bay. The need now for the MP2 Project arises from both the level of future growth DPC is projecting and the time required to complete the development works (2020 – 2035). By reconfiguring how existing facilities and lands are currently used, the MP2 Project will create additional capacity for almost one-third of the projected increases in Dublin Port’s Ro-Ro (truck) and Lo-Lo (container) traffic between now and 2040.

When complete, the MP2 Project will also increase Dublin Port’s capacity to handle growing ship sizes by providing up to three longer, deeper river berths capable of taking Ro-Ro ferries and Lo-Lo container ships measuring up to 240m in length.

“Masterplan 2040 provides a sustainable path for us to develop the port and the MP2 Project will provide much needed additional capacity to cater for projected growth of both Ro-Ro and Lo-Lo traffic from now up to 2040.

“Within the MP2 Project, we are readying ourselves to repurpose our oil importation facilities. As petroleum imports decline in future years, the MP2 Project will allow us to turn oil berths into container berths. “As part of our ten-year €1 billion capital programme to 2028, we will complete the ongoing ABR Project, commence works on the MP2 Project itself and advance works on a variety of other projects including the development of Dublin Inland Port. The company’s Board recently approved a new € 300m debt facility to finance the first phase of the ten-year programme.”

On Track for Record Growth in 2019

The application comes as DPC publishes its latest trade figures, which show Dublin Port is on course for a fifth successive record year with 2.5% growth in the first six months of 2019 . Growth in the first six months to 19.2 million gross tonnes came from both rising imports (+3.6%) and increasing exports (+1.0%). Looking at the port’s unitised trade, Ro-Ro freight volumes (trucks) increased by 4.1% and Lo-Lo freight volumes (containers) were very strong, up 10.4% year-on-year. Ferry passenger numbers also moved ahead by 3.5% following Irish Ferries’ deployment of the W.B. Yeats on its service to Cherbourg.

“We are seeing clear evidence of the effects of Brexit in our trade figures. Where unitised trade with GB ports grew by 9.7% in the first quarter, volumes declined by -1.8% in the second quarter. For unitised trade with Continental Europe and beyond, on the other hand, first quarter growth of 8.3% was followed by even stronger growth of 10.0% in quarter two. The MP2 Project is designed to facilitate growth in volumes to Continental Europe as Brexit changes trade patterns in the coming years.” 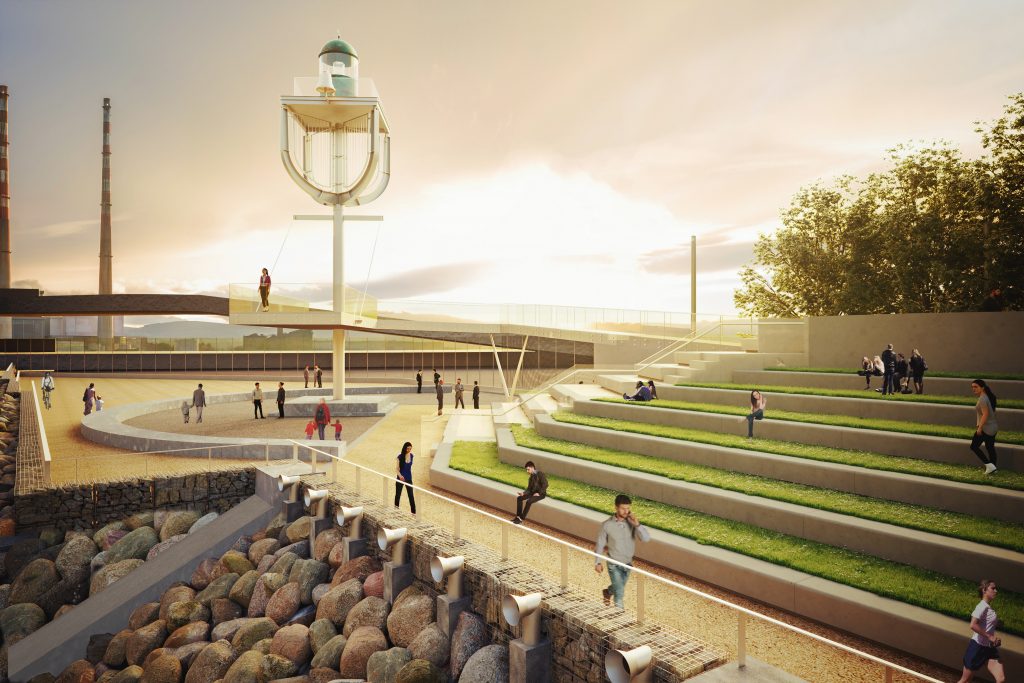 The MP2 Project also includes provision for a publicly accessible Heritage Zone at the eastern end of the Port. This will include a new structure or ‘Marker’ incorporating the original lighthouse bell and lantern from the pier head at the end of the long gone 19 th century eastern breakwater. The Marker includes a Viewing and Interpretive Deck, and beneath it a small performance space or amphitheatre. The proposal also features the installation of a Sea Organ, a musical instrument made from a series of pipes with whistle openings installed into the land boundary. The Heritage Zone will be accessible by cyclists and pedestrians along the new 4km greenway on the northern fringe of the port overlooking the Tolka Estuary. Construction of the greenway will commence later this year. In the event that permission is granted for the MP2 Project, a Community Gain initiative is also proposed as part of the application that would see DPC establish a €1 million trust fund for Dublin City Council to develop a city farm in the vicinity of the Port , intended to enhance the local community and benefit the wider city through educational, volunteering and collaboration opportunities. In addition, DPC would establish a €1 million trust fund for St. Joseph’s Co-Ed Primary School in East Wall , intended to benefit the school community closest to the development site.

The application for permission, the Environmental Impact Assessment Report and the Natura Impact Statement, will be available to inspect during public opening hours for seven weeks from 19th July 2019 at: –

● The Offices of An Bord Pleanála 64 Marlborough Street, Dublin 1.

The application may also be viewed / downloaded from the project website: www.dublinportmp2.ie

Public Information Days will also take place in the following locations, where the MP2 Project Team will be available to discuss the project in person and where the application documents will be on view.

Submissions or observations may be made only to An Bord Pleanála up until 5.30pm on 6 th September 2019. See www.pleanala.ie for further details. 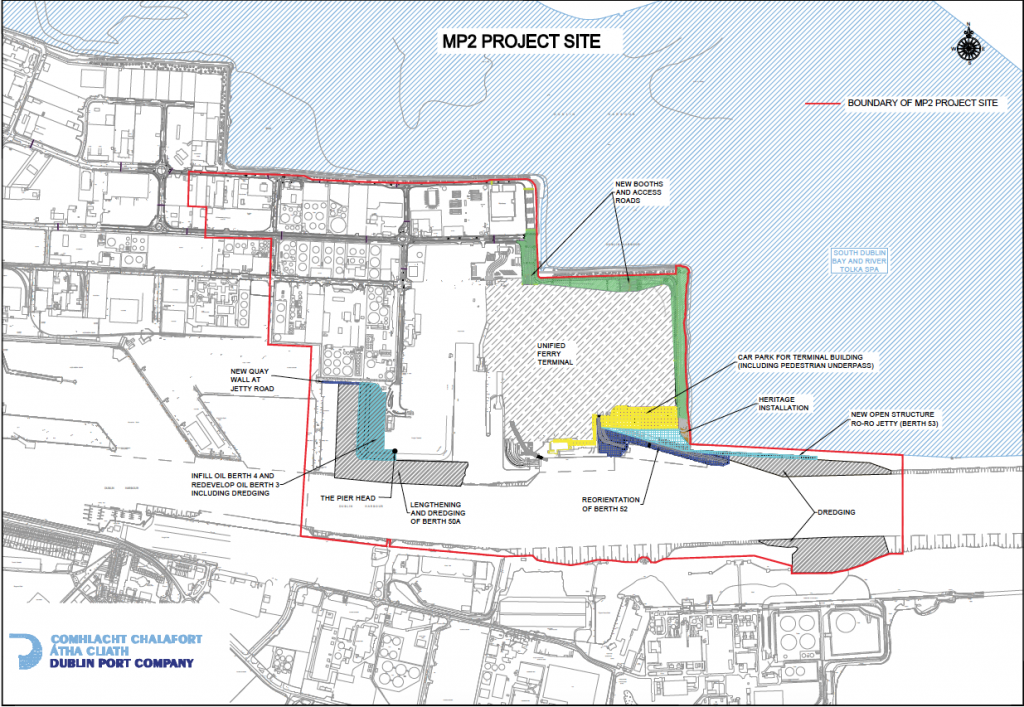 Trailers and containers down by 56,000 (-3.8%) to 1.4 million units Dublin Port Company has today reported trading figures for the fourth quarter of [...]
more