With just over two weeks to go before the re-introduction of border controls on goods arriving from Great Britain, Dublin Port Company (DPC) has today announced:

The new measures are being introduced this week and will be in full effect in advance of the introduction of the new border controls on 1st January 2021.

The improvements and changes are detailed in a new booklet, Six Key Messages for Hauliers. 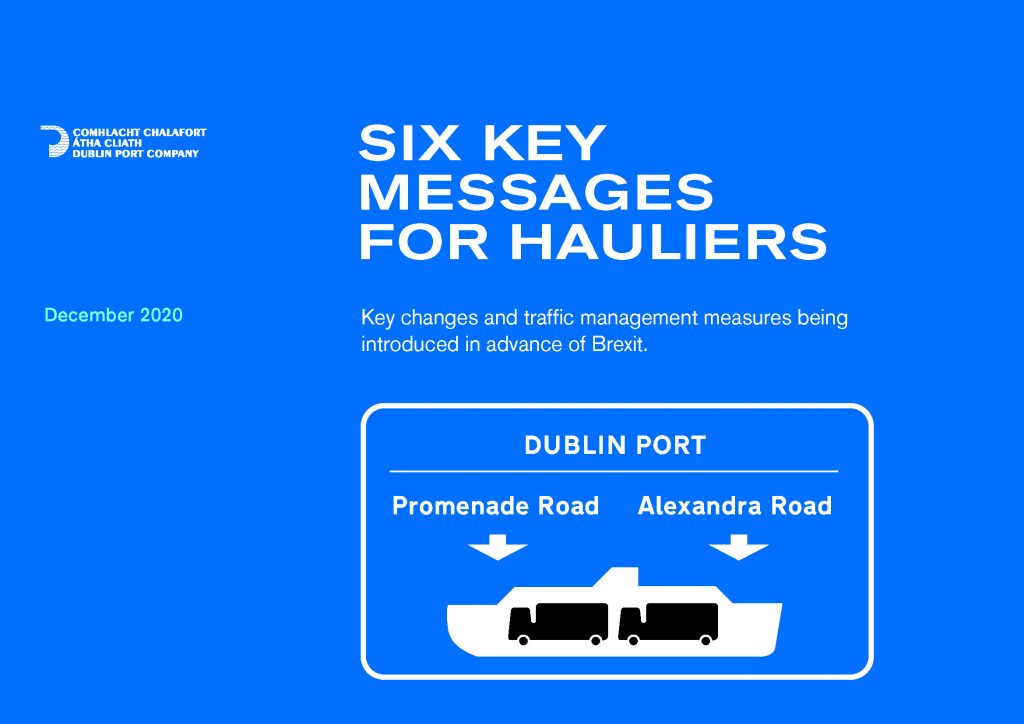 Even with additional road capacity and traffic management measures in place at Dublin Port, all operators and port users have their part to play to keep trade flowing and ensure that extreme contingency plans are not needed in response to congestion.  This is especially so in the first 90 days of 2021.

The challenge for State agencies – notably Customs and the Department of Agriculture, Food and the Marine (DAFM) – is to apply border inspection controls efficiently around the clock on six times the volume of goods that were arriving off ferries 28 years ago when the Single European Market removed the need for such controls.

As part of the challenge to prepare for Brexit, eight inspection facilities have been constructed for Customs and DAFM by DPC and OPW at six different locations in Dublin Port.  Dublin is already a busy port and the additional requirement for hauliers to move trailers between ferry terminals and these eight different facilities will increase traffic levels within the port for the same volume of cargo.

Greater separation between the arrival times of the Holyhead ferries would greatly reduce the risk that the inevitable delays which border checks will cause might escalate to the point of congestion.

In addition to the timing of ferry arrivals, there are busy container terminals in Dublin Port with high levels of HGV traffic particularly in the early morning and late afternoon on weekdays.  The collection of containers from terminals needs to be scheduled by the container terminal operators, the hauliers and the cargo owners to reduce peaks and prevent excessive queues building on the port’s internal road network.

Brexit delays are inevitable – congestion is not.

“The continued congestion-free operation of Dublin Port post-Brexit requires all port users to play their part.  Since 2018, DPC has spent €30 million to make assets and infrastructure available to OPW to provide Border inspection facilities on eight sites covering a land area of 14.6 hectares.  There is now 16,000 square metres of warehousing with 25 loading bays giving an annual capacity for well over 100,000 physical inspections of containers and trailers.

“There is huge infrastructural capacity in place and the challenge now is to use this capacity efficiently to ensure that goods keep flowing. There is a simple and obvious measure of success and that is the ability of hauliers to provide their essential services without being delayed in Dublin Port.  The six key messages we have published today are intended to help achieve this objective.  Delays because of Brexit border checks are inevitable, but congestion is not.

“Even with continuing works on the port’s road network in recent times, we have recently seen two of the busiest months ever for unitised trade and traffic has flowed smoothly into and out of the port.  In October – the second busiest month in the history of Dublin Port – our unitised trade was 2.2% ahead of last year; November – the fourth busiest month ever – was 12.2% ahead.  Now that the road works are complete – and even with the introduction of border controls in January – there is no reason why traffic should not continue to flow freely so long as all supply chain operators play their part.

“The closeness in the arrival times of ferries from Holyhead is an obvious cause of concern in January and brings with it the risk of delays being increased to the point of congestion on the road network within Dublin Port.  We have asked the two ferry companies operating the Holyhead services to bring the arrival time of the first ship in each of the four daily waves forward and to bring the second ship in somewhat later in order to flatten the demand curve for incoming HGVs.  In making this request we guaranteed to the ferry lines that they could return to their current slot times at any time during the first 90 days after the new border controls come into place.  Disappointingly, one has refused our request and the other has yet to respond.

“Supply chain behaviour is going to have to change after Brexit and hauliers need to know what they can expect in terms of waiting times for border inspections by State agencies.  It is important for hauliers and their customers – the cargo owners – to know how long the different types of checks by Customs and DAFM will take so that they have some sense of the delays they will face and are able to plan their operations accordingly. 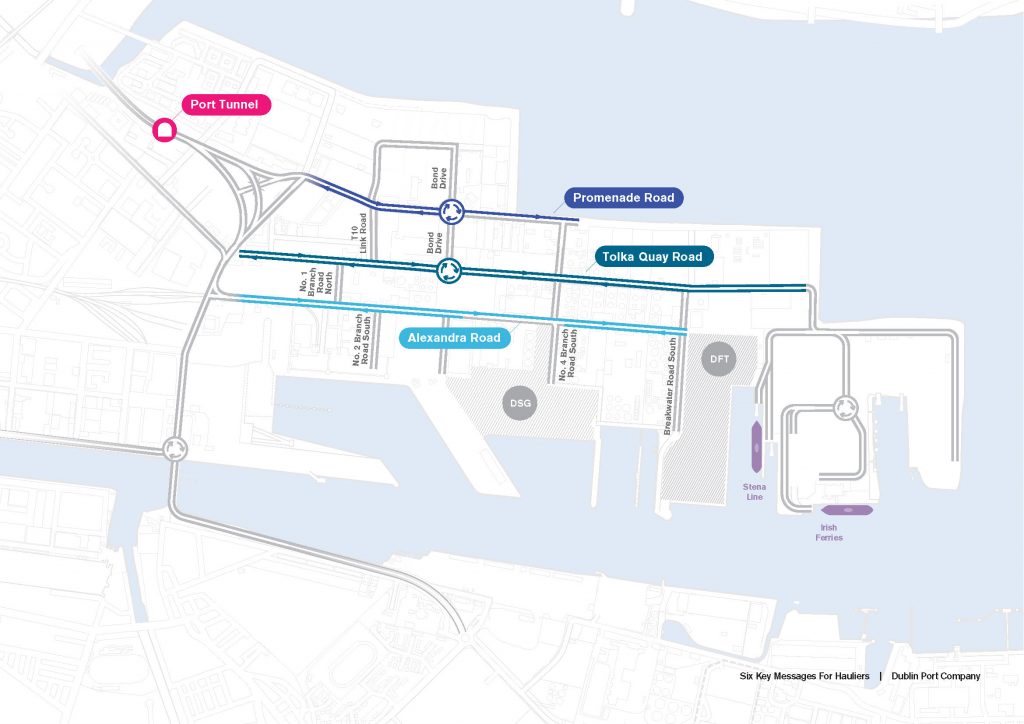 Port Entry and Exit routes – Major road works have been completed in the vicinity of the Circle-K service station and there is now full dual carriageway access and egress to Dublin Port along Promenade Road linking directly to the Dublin Port Tunnel.

From 1st January 2021, HGVs will no longer be permitted to exit Dublin Port from Alexandra Road onto East Wall Road.

Also, from 1st January 2021, HGVs accessing specified locations along Alexandra Road will be required to enter the port directly from East Wall Road.  All other HGV traffic will enter via Promenade Road.

Dublin Port Tunnel – In the worst case, the contingency plan recently announced by the Department of Transport to deal with the impact of port congestion on roads outside Dublin Port will be implemented.  This could include U-turning traffic exiting the southbound bore of the Dublin Port Tunnel before it enters Dublin Port and directing it back through the northern bore of the tunnel to designated parking areas.

All of the above measures are designed to maintain the efficient flow of HGVs within Dublin Port and prevent delays in port traffic escalating to the point where traffic on roads adjacent to the Port or on the national motorway network are affected.

The new booklet Six Key Messages for Hauliers is available to download here.