The purpose of the initiative is to support and foster an enhanced safety culture among port workers which will see Dublin Port Company and the seven terminal operators increase their collaboration on standardising safety practices across the 260-hectare estate.

A key part of Dublin SafePort is the roll out of ongoing safety awareness campaigns to promote a safer working port for all. The first kicks off today to promote road safety in Dublin Port. As part of the campaign, DPC teams will be on the ground to engage with road users on driver behaviour, safety etiquette, speed limits and significant changes to the port’s internal road network following major upgrade works.

A map of the new internal road network showing traffic flows, speed limits and other essential driver information has been launched today as part of the campaign and will be made available to port users including the thousands of HGV drivers who move through the port weekly.

Today also sees Dublin Port host the Road Safety Authority (RSA)’s Shuttle Bus, giving port workers a chance to interact with the campaign. On board the Shuttle, port workers can practice their driving and hazard perception skills in state-of-the-art simulators; experience first-hand the dangers of driving and texting and driver fatigue; and try out the brake reaction timer to see how driving environments and speed affect braking distances and learn about tyre safety.

The focus on road safety follows completion of the main phase of Dublin Port’s internal roads project to upgrade and reconfigure the port’s internal road network. This includes the creation and upgrade of nearly four kilometres of road within the north port area, as well as major improvements to key junctions to increase capacity and flexibility of use, improving the existing network in advance of predicted increases in cargo traffic. Improved routes for cyclists and pedestrians are also being provided as part of the roads projects with an objective of having active travel needs fully met throughout the north port area by the end of next year.

The latest trade figures show Dublin Port volumes have returned to the record levels achieved in 2019 pre-pandemic and pre-Brexit.

The investment in roads, in active travel and the launch of Dublin SafePort are important steps in the safe development of Dublin Port in line with Masterplan 2040.

Coinciding with the road safety campaign, a new 20km/h speed limit now applies at Dublin Port’s new Unified Ferry Terminal (UFT) which has recently come into use, replacing the previous system of separate entry and check-in points for vehicles boarding the Irish Ferries and Stena Line ferries. This is in addition to the 20km/h speed limit already applicable in the Common User Areas, some of the busiest and most densely populated parts of the port. DPC teams will be engaging with drivers on the 20km/h speed limits in both areas over the coming months to promote awareness and adherence. 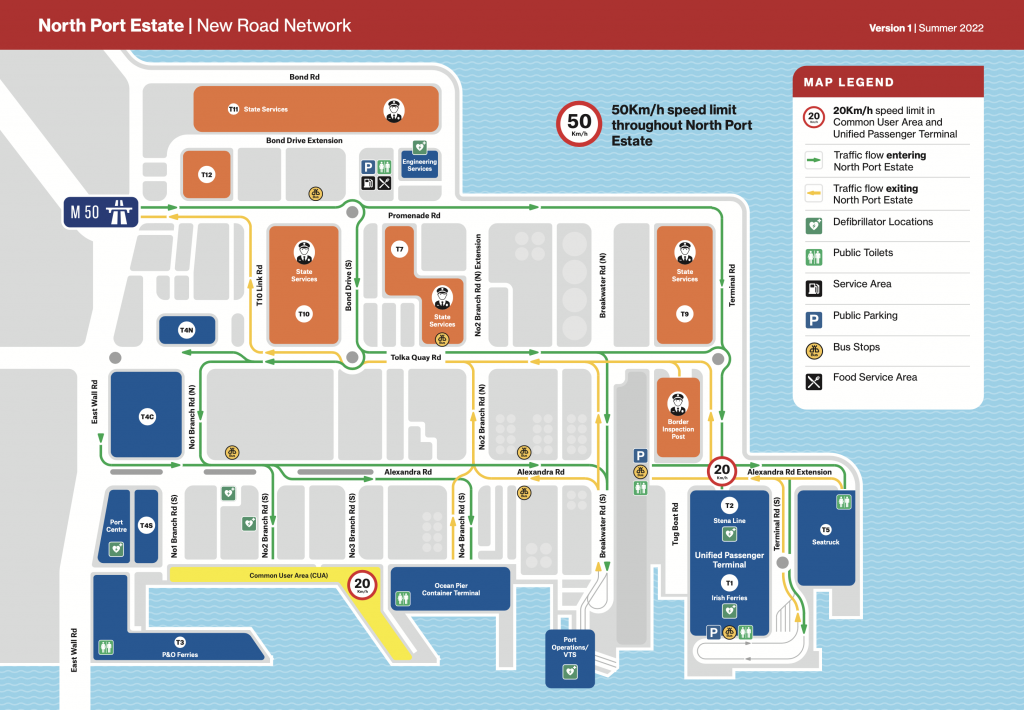 “A port-wide safety culture is essential in a port as busy as Dublin.

“Today’s launch of Dublin SafePort is the result of extensive collaboration and alignment with all seven unitised terminal operators to ensure Dublin Port is a safe port for all who work and visit. By working together, we have created a single, unifying safety initiative that enhances port safety culture and practice for the long term.

“Now that the main works on our internal road network are complete, it’s time to kickstart our first campaign with a spotlight on road safety at Dublin Port this summer. We’ll be working with all port users ashore and afloat and supporting HGV drivers to understand the new internal road network.

“We are grateful for the support of key stakeholders including An Garda Síochána, the Road Safety Authority and the HSA as this campaign gets underway. We look forward to working together as one team under Dublin SafePort.”