2. Financially, cruise is a small part of Dublin Port’s business:

Cargo has grown and is the priority

7. From 2021, unitised freight volumes in Alexandra Basin will increase greatly.

8. Two thirds of all cruise ships berth in Alexandra Basin.

11. This greatly increased volume of shipping activity in Alexandra Basin will be operationally challenging with large numbers of cruise and other ship arrivals for existing trades (Ro-Ro; bulk ships; car carriers).

14. CLdN operates its container and trailer Ro-Ro business from Ocean Pier in Alexandra Basin. This accounts for 40% of all units moved between Dublin Port and Continental Europe. (Container shipping lines such as BG Freight, ICG’s Eucon and Samskip carry the remaining 60%).

15. Moving Seatruck to Alexandra Basin is critical to allow the redevelopment of Ro-Ro berths and terminal areas for Irish Ferries and Stena Line in the eastern end of the port without disrupting their businesses.

17. Figure 3 shows the new jetty being constructed in Alexandra Basin to which Seatruck will move in 2021.

18. The volume of freight moved on direct services between Dublin Port and Continental Europe is already 2.4 time greater than moves over the UK landbridge. See Table 2.

19. After Brexit, it is expected that volumes on direct services to Continental Europe will increase. In this context, the CLdN service in Alexandra Basin is particularly important.

20. Because of Brexit, DPC will lose more than eight hectares of land leaving no spare land for temporary cruise terminal facilities for turnaround calls from 2021.

21. As part of the ABR Project, Alexandra Quay West will be under construction for at least two years spanning three cruise seasons from 2021 to 2023.

22. During this period, all ships that would normally be worked there will relocate to Berth 33 on Ocean Pier West (which is the main berth on which large cruise ships are currently handled).

23. The allocations of berths for cruise ships from 2019 to 2021 as set out in the new berthing and pricing policy is explained in Table 3.

24. The locations of the berths named in Table 3 are shown in Figure 2.

26. For 2021, we are currently finalising bookings in accordance with the recently published berthing and pricing policy.

29. The objective of this policy is to ensure we don’t accept too many bookings in future years and prevent construction works commencing on Alexandra Quay West.

30. After 2023 when works on Alexandra Quay West are completed, it will be possible to again increase the number of cruise ships back towards 150. The extent to which this will be possible will be determined by the growth in cargo volumes between now and then.

31. The period from 2023 to 2025 will be an interim period to rebuild cruise volumes ahead of the development of North Wall Quay Extension.

32. DPC has planning permission from An Bord Pleanála to construct new berths for cruise ships on North Wall Quay Extension (Berths 18 to 25) post 2023 as part of the ABR Project.

33. DPC’s policy in relation to the investment to build these new berths is set out in Masterplan 2040 as follows:

The Port recognises that new cruise facilities will be required to further develop this business and cater for future growth prospects. The Company believes that the consented option of redeveloping North Wall Quay Extension best meets the objective of growing Dublin’s cruise tourism business to its maximum potential.

The main attraction of the cruise industry is the generation of significant revenues for the Dublin region – the actual contribution to DPC’s revenues is not significant. Accordingly the Port could part fund the development but additional funding would be needed from other sources given the scale of capital funding required and the requirement for DPC to demonstrate a return on capital invested. DPC will engage with Dublin City Council (DCC), Fáilte Ireland, the Department of Transport, Tourism and Sport (DTTAS) and other potential funders (both private sector and public sector) on the financing of the project to redevelop North Wall Quay Extension.

34. The redevelopment of North Wall Quay Extension to provide cruise berths is the subject of an economic cost-benefit analysis study by Indecon / Bermello Ajamil which DPC will publish and consult on in mid-2019.

35. Investment by DPC requires third party financial support as has happened in other large cruise ports such as Barcelona.

36. A key part of the consultation will be to determine the cruise industry’s appetite to:

a) Sufficiently guarantee cruise ship calls and revenues to DPC for up to ten years so as to de-risk DPC’s large capital investment (in the order of €100m).

b) Agree that all cruise ships on NWQE will use shore power when at berth and turn off on-board diesel generators to reduce potential air pollution.

37. A second part of the consultation will focus on potential co-funding by the State of the investment based on the wider economic benefits it would generate.

39. In particular, in the three years from 2018 to 2020, there are large cruise turnarounds with an average of 25,000 passengers disembarking and 25,000 embarking in Dublin in each season.

40. As a result of this development of the cruise business in Dublin, DPC has achieved proof of concept that Dublin Port can sustain a major cruise business with large numbers of valuable turnaround passengers.

41. There are four phases to realising this potential: 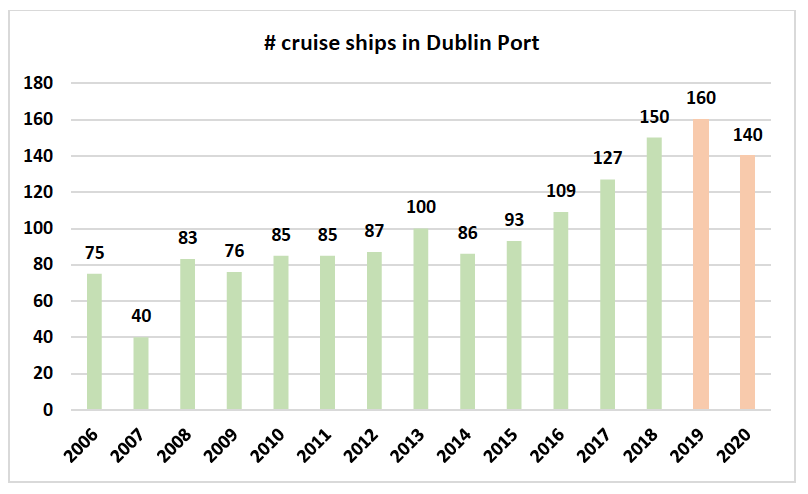 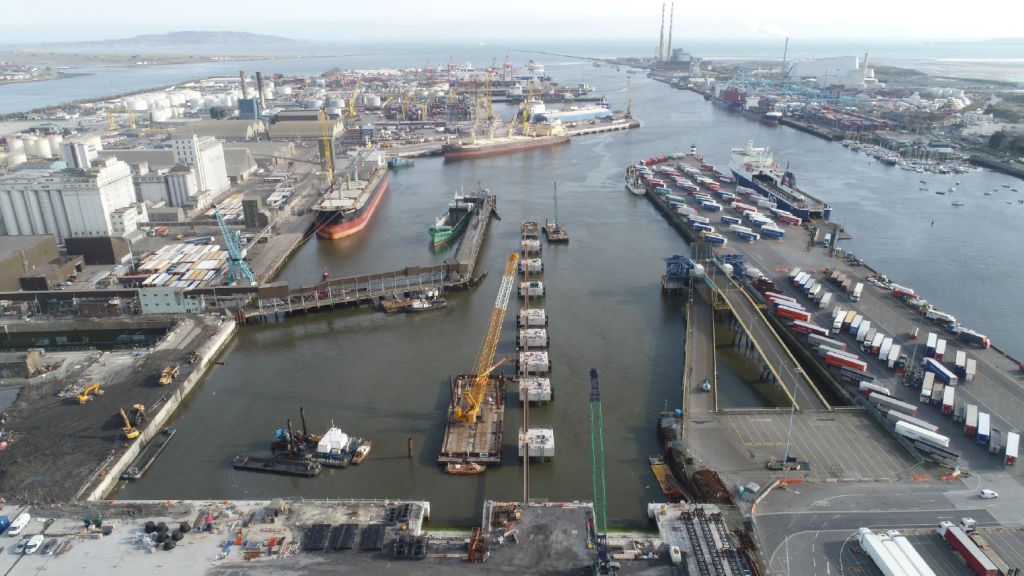