Find made underneath former electricity substation at East Wall Road

Dublin Port Company has today announced the discovery of part of Dublin’s original sea wall dating back to the late 1720s, which has never been seen before.

Accompanying this significant archaeological find are dockworker artefacts, including several clay pipes embossed with trade union and political logos, including a Parnell MP pipe thought to be one of the earliest examples of political campaign support merchandise in Ireland. Leather shoe parts belonging to dockworkers, as well as 19th-century pottery fragments, glass and bone have also been recovered for preservation by Dublin Port Company.

This historic discovery was made during project construction works being carried out by Dunwoody & Dobson building contractors on behalf of Dublin Port Company of the former redbrick electricity substation located near the junction of East Wall Road and Alexandra Road in the grounds of Port Centre. 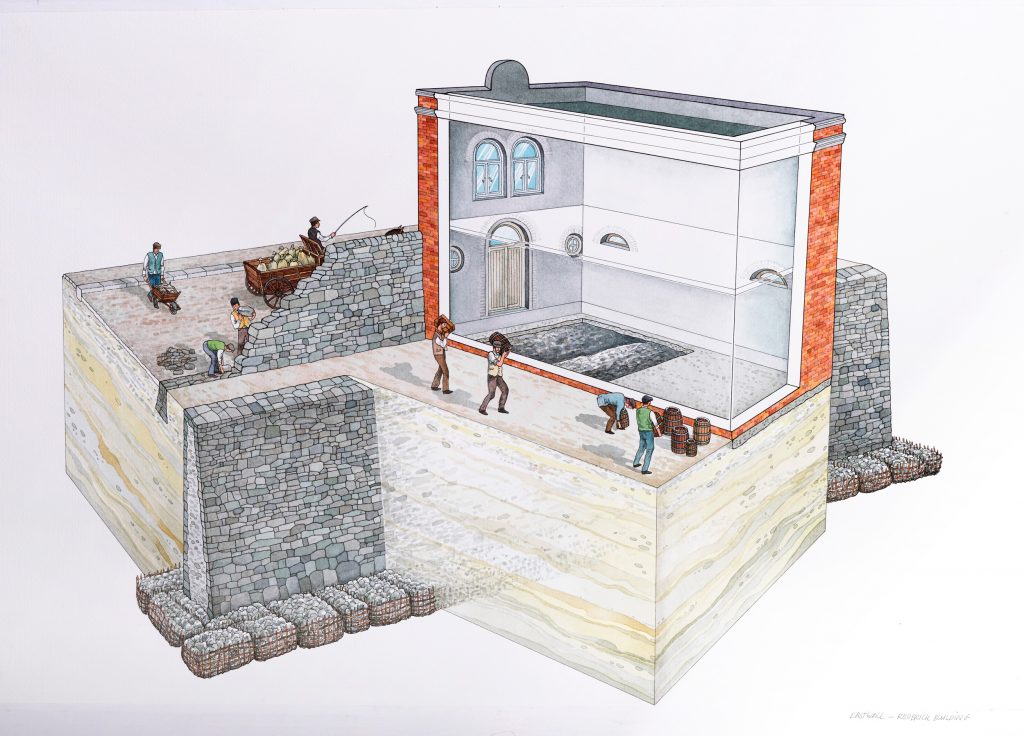 Role of the Sea Wall in Dublin’s development

The original sea wall once enclosed the eastern and northern sides of newly reclaimed land that would become known as the North Lotts – acting as a polder. As the port extended eastwards away from the city, the sea wall’s original purpose became obsolete, and the facing stones of the wall were removed. It is likely that the stones were re-used to construct the 3-metre-high boundary wall that defines the port’s perimeter today, visible from East Wall Road. It is from this original sea wall that the area known as East Wall derives its name today. 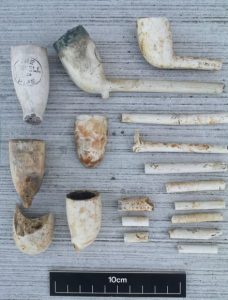 The dockworkers’ pipes discovered include a Parnell MP pipe, showing support for Charles Stewart Parnell who was a Member of Parliament from 1875 to 1891 and leader of the Home Rule and Land League movements. It is thought to be one of the earliest examples of political campaign support merchandise in Ireland.

A number of the pipes bear the mark of the Dublin United Trades Association, which operated from 1863 to 1883 and was one of the first national trade union organisations in the world, pre-dating the British Trade Union Congress by five years. It was succeeded by the Dublin Council of Trade Unions.

New Permanent Display & Distributed Museum The story of the eighteenth-century sea wall in the evolution of Dublin Port and the City, and the role of the redbrick substation in the early electrification of Dublin Port will go on permanent display within the rehabilitated building at Port Centre.

Dublin Port Company’s plans for the building include a glass panel feature floor, enabling visitors to view the exposed sea wall that once served to protect the East Wall from flooding.

The display will become the latest addition to Dublin Port’s distributed museum, a key part of Masterplan 2040’s strategic objective to integrate the Port with the City. When complete, the redbrick substation museum display will be part of a 6.2km cycle and pedestrian route linking port, maritime and industrial heritage landmarks and vistas from Dublin’s Docklands through the Dublin Port estate and overlooking Dublin Bay.

The largest component of the distributed museum will be The Flour Mill to be designed by Grafton Architects. When complete, The Odlums Flour Mill will offer 5,000 square metres of studios, performance spaces, and rehearsal rooms for artists in the city. The Arts Council and Dublin Port Company have just signed a Memorandum of Understanding for the development of the Flour Mill as an “Artist Campus and Workspace”.

“We have long suspected that part of the original sea wall may have lain beneath the old redbrick substation, which itself is a protected structure. But it has been incredibly exciting to have those suspicions confirmed, and to see this part of the original “East Wall” for the first time.”

“Between the wall itself and the artefacts uncovered, this represents a significant find by any standard. It not only furthers our understanding of the city’s development eastwards, but also the lives and political leanings of dockworkers of the day. We look forward to sharing our discovery and telling these stories when the redbrick Victorian substation opens to the public in early 2023.”