Dublin Port has today reached an important milestone in delivering Masterplan 2040 with the appointment of Grafton Architects to design the Liffey-Tolka Project, the most important Port-City integration project to date.

The Liffey-Tolka Project will create a new public realm along a 1.4 km dedicated cycle and pedestrian route linking the River Liffey with the Tolka Estuary through Dublin Port lands on the east side of East Wall Road and along Bond Road.

The new linear space ranges from twelve metres to nine metres wide and will be an extension of the campshires on North Wall Quay.

The Liffey-Tolka Project will bring cyclists and pedestrians from the Liffey to the start of a second Port-City integration project, the Tolka Estuary Greenway.

The Tolka Estuary Greenway is a 3.2 km route along the northern perimeter of Dublin Port overlooking the Tolka Estuary.  Construction of Phase 1 (1.9 km) will start next month and works will be completed by Spring 2022.  Phase 2 (1.3 km) will be constructed over the following five years as part of large port infrastructure projects to deliver additional Ro-Ro freight capacity at the eastern end of Dublin Port.

Dublin Port Company will apply to Dublin City Council for planning permission for Grafton Architect’s design for the Liffey-Tolka Project by April 2021 with a target to commence construction by September 2021 and to complete the works by the third quarter of 2022.  The new route will include a dedicated bridge for cyclists and pedestrians to safely cross over the busy Promenade Road, the key artery that links Dublin Port to the Dublin Port Tunnel and one of the most heavily trafficked roads in the country.

Construction of the new civic space will transcend the opening of the new T4 Ro-Ro freight terminal as part of the Alexandra Basin Redevelopment Project.  As an indication of its scale, the T4 terminal will provide more Ro-Ro freight capacity than Rosslare Harbour.  More importantly, the opening of T4 will allow Dublin Port Company to close one of the HGV entrances on East Wall Road and to redirect heavy goods traffic onto Dublin Port’s internal road network thereby greatly reducing heavy traffic along one of the city’s most hostile stretches of urban road.

Commenting on Grafton Architects’ appointment, Eamonn O’Reilly, Chief Executive of Dublin Port Company said: “Delivering Masterplan 2040 is very complex and our focus to date has been on projects which deliver additional freight capacity.  However, an equally important, albeit smaller part, of our Masterplan is integrating Dublin Port with Dublin City.

“We have been delivering projects such as the Diving Bell in 2015 and the Opening of Port Centre in 2017 as isolated stepping stones to integrate the Port with the City but, with today’s appointment of Grafton Architects to design the scheme to link the Liffey with the Tolka, we have cut the Gordian knot of the complex challenge to open up Dublin Port to Dubliners.

“Dublin Port is not going anywhere, and we are committed to developing nationally important port infrastructure in accordance with the principles of proper planning and sustainable development.  This requires us not only to cater for the needs of cargo and commerce; we must also create real gain for the citizens of Dublin.

“Within two years, we will have completed a dedicated cycle network throughout Dublin Port and along most of the Port’s perimeter.  Doing this in a small but extremely busy port requires great design and we are delighted to be working with Grafton Architects as we take on a unique challenge to integrate Dublin Port with Dublin City.

“We have been working with Grafton Architects for the past year to prepare the Flour Mill Masterplan as the blueprint for the redevelopment of the former Odlums Flour Mill on Alexandra Road.  This development is an integral part of our plans to deliver the €1.6 billion of port infrastructure projects required to bring Dublin Port to its ultimate capacity by 2040.

“Developing masterplans is one thing; but turning great design into completed projects is the real challenge.  We are delighted to have the empathy and expertise of Grafton Architects to help us realise our ambitions as we link the River Liffey to the Tolka Estuary. We couldn’t be in better hands.”

Commenting on Grafton Architects’ appointment by Dublin Port Company, Shelley McNamara said: “An influential and important exhibition took place at The Museum of Modern Art in New York in 2010 with the title Small Scale: Big Change.  The architectural projects exhibited were transformative in their effect rather than their size and highlighted the capacity for incisive creative thinking to open up new possibilities within communities and cities.

“The Liffey-Tolka Project to connect the River Liffey to the Tolka Estuary, along East Wall Road and Bond Road is not so small but, at the scale of the City it might be considered to be.  However, its transformative effect will be immense.

“The currently hostile East Wall Road will become a linear Civic Space.  This will form a new sense of entry to the City when travelling from the North and from the Dublin Port Tunnel.

“The drama, scale and animation of the Port will be revealed, joining up with the life of the City. The visual barrier which currently separates these two interdependent worlds will disappear.  The pavement area will increase from a two metre width to twelve metres, offering a safe pleasurable landscaped space for people to walk or cycle.  This new ribbon of space, bridging over Promenade Road, will connect the East Coast Trail and Dublin Port’s Tolka Estuary Greenway to the Liffey, terminating in a sunny public space on the water’s edge. This will be a new Urban Amenity for day to day use and for enjoyment in times of leisure.

“We developed a deep appreciation and understanding of Dublin Port from our work on The Flour Mill Masterplan and we are very excited now to have been appointed to bring a project as important to the City as the Liffey-Tolka Project to the consenting phase and, hopefully, to construction next year.” 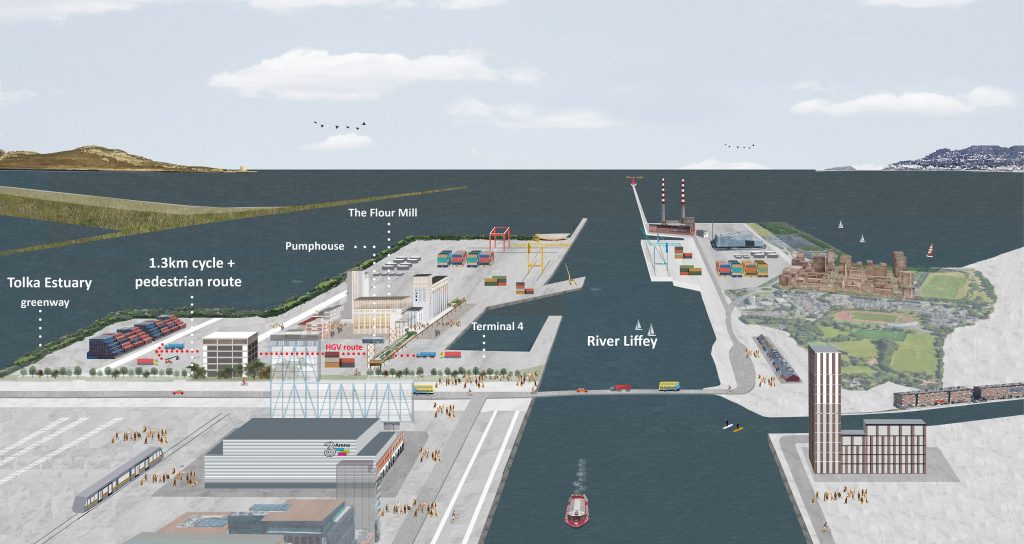 The Liffey-Tolka Project is part of a wider Dublin Port initiative to create a distributed museum.

The distributed museum starts at the Diving Bell and, over the course of 6.3km, will give Dubliners a real sense of the City, the Port and the Bay.  For visitors, it will be a unique eye-opening stroll and vista through and alongside one of Europe’s busiest ports:

The Pumphouse is a heritage zone being created as part of the Alexandra Basin Redevelopment Project.  The first phase of 1.6 acres will be completed in early 2021 and will include historical port equipment and buildings and a large open space for exhibitions and performances.  It will be expanded in a subsequent phase to incorporate the Victorian Graving Dock No. 1 which will be excavated and revealed.

The largest component of the distributed museum will be The Flour Mill.  This involves the redevelopment of the former Odlums Flour Mill on Alexandra Road based on a masterplan completed by Grafton Architects to provide a mix of port operational uses, a National Maritime Archive, two 300 seat performance venues, working and studio spaces for artists and exhibition spaces.  The Flour Mill will be developed in stages over the remaining twenty years of Masterplan 2040 alongside major port infrastructure projects.

The Flour Mill Masterplan is available to download here. 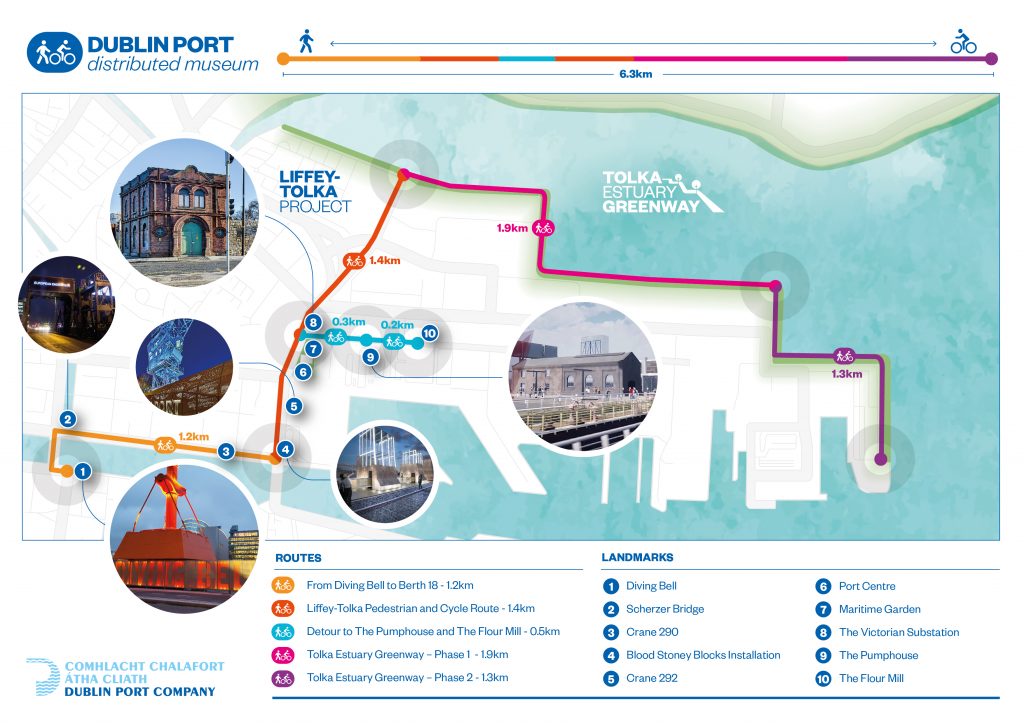