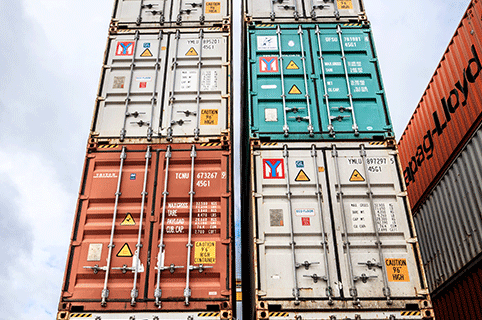 Containers and freight trailers must move through Dublin Port lands at faster pace as growth continues with volumes up 7.0% in Q1 2019

Dublin Port Company (DPC) has today announced an initiative to decrease the dwell time of containers and trailers at Dublin Port so as to increase the Port’s throughput capacity for future growth.

Phase 1 of the Dublin Port Dwell Time Initiative* will see DPC reduce the free time period allowed for containers and trailers (from seven days to four days) at one of the three container terminals in Dublin Port which handles trade with Continental Europe. DPC will also double the daily quay charges applied after this free period (from €20 per day to €40 per day for a 40’ container).

The changes come into effect on 1st June 2019 and will apply to container and trailer traffic using the terminal operated by Doyle Shipping Group (DSG). The terminal is owned and controlled by Dublin Port Company.

DPC is introducing the measure in order to maximise the use of land at the terminal. Shorter dwell times will lead to fewer containers being stored for longer than necessary, thereby freeing up space for more cargo to move through the same amount of land. This increases port capacity.

The initiative comes as new trade figures for Q1 2019 reveal that Dublin Port experienced its busiest single month on record with throughput of 3.4m gross tonnes in March, with overall cargo volumes for the first quarter up by 7.0%. The first quarter growth to 9.7 million gross tonnes came from both rising imports (+8.0%) and increasing exports (+5.6%). [**See Table below for full details].

The terminal operated by DSG accounts for 45% of containers and trailers moving between Dublin and ports in Continental Europe and beyond. DPC is already seeing accelerating growth on direct routes to Continental Europe in advance of Brexit.

The need to maximise the use of land at Dublin Port is more pressing following the loss of eight hectares of port lands to State Agencies for secondary inspection facilities required after Brexit. Although eight hectares equates to only 3% of the overall land area at Dublin Port it represents 25% of the port lands available for development for the transit storage of freight in containers and trailers under Masterplan 2040.

“Our container terminals are operating at half of the target land utilisation we set for them in our Franchise Policy in 2014. One of the impacts of Brexit is that we have to achieve these targets sooner. The Dublin Port Dwell Time Initiative provides essential financial incentives to move cargo through the port more quickly.

“I am calling on the operators of the two leased container terminals – ICG’s DFT Container Terminal and Peel Ports – to follow our example and become similarly ambitious in the efficient use of Dublin Port land.

“The changes we are introducing will require significant alterations in supply chains. With volumes growing rapidly and Dublin Port set to reach full capacity by 2040, the days of container terminals in Dublin Port providing free or very cheap storage for importers or exporters are coming to an end.

“With all the economic uncertainty, volumes through Dublin Port are remarkably robust and underpin the need for us to continue to invest in additional port infrastructure guided by our own Masterplan 2040 and by Project Ireland 2040. We are currently seeking Government approval for company borrowings of €300m to continue the Port’s ambitious and essential ten-year €1 billion investment programme.

Dublin Port’s current free periods and quay charges in the container terminal operated by Doyle Shipping Group is as shown below. 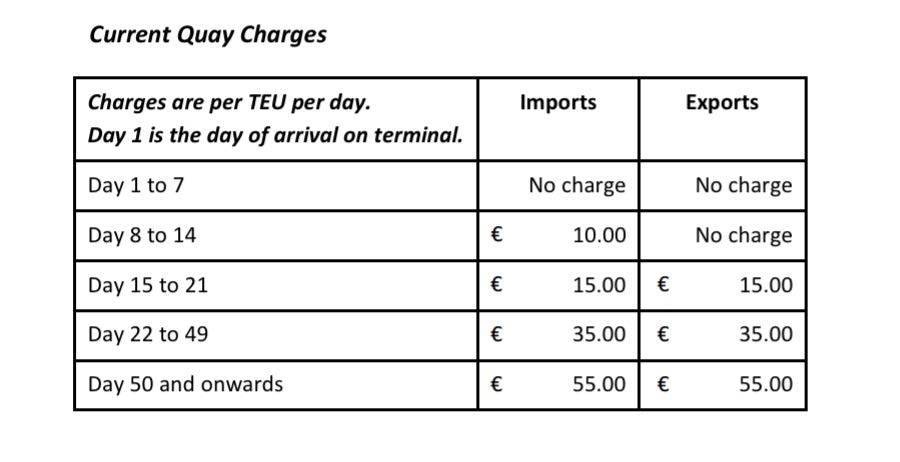 With effect from 1st June 2019, DPC is reducing free periods (approximately halving them) and increasing charges (doubling them) as shown below: