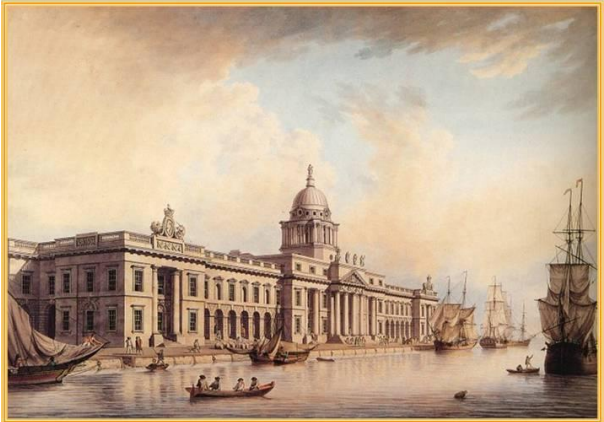 Every Tuesday during October 2018

A History of Dublin Port from 1707

The effects of containerisation on Dublin Port

The Red Hand Badge and Buttons:

A Virtual tour of Dockland

Lar Joye is Port Heritage Director at Dublin Port. Previously he curated the award-winning exhibition ‘Soldiers & Chiefs’ at National Museum of Ireland, described as a museum within a museum. He played a key role in the Decade of Commemorations 2012-2017 involved in a variety of projects including the ‘1913 Lockout: Impact & Aftermath’ and ‘Banners Unfurled’ exhibitions and the WWI exhibitions ‘Recovered Voices 1914-1916’ and ‘War in the Mud, the Irish Soldier on the Western Front, 1917’. He represented the National Museum on the Irish Battlefield commission and on the Moore Street and GPO projects. In 2016 he was historical adviser for An Post’s 2016 commemorative stamp series. More recently he has partnered with the theatre company Anu productions on the plays Pals- the Irish at Gallipoli, Sunder and These Rooms.

Aileen O’Carroll is the Policy Manager at the Digital Repository of Ireland (DRI). She is based in the Maynooth University Social Science Institute (MUSSI), where she manages the Irish Qualitative Data Archive (IQDA). This role involves the development and implementation of standards for deposit and access to qualitative data (text based, audio and visual) in line with emerging international and EU standards. She additionally advises researchers on best practice in managing and archiving research projects, both to ensure that ethical commitments are met and that the data gathered is of the highest standard to facilitate optimal re-use by a variety of audiences. Aileen is also attached to the Life History and Social Change project, based at the National University of Ireland, Maynooth. With Don Bennett, she is the author of The Dublin Docker: Working Lives of Dublin’s Deep-Sea Port.

Declan Byrne is a member of the Dublin Dock Workers Preservation Society and has a special interest in the Liffey Ferry, which brought dock workers to either side of Dublin Port. There was a cohort of dockers resident in social housing in Dalkey, which the No. 7 bus left at 5.00 a.m. to bring the workers directly to the Liffey Ferry. Declan has more stories to tell about this Dublin icon.

John ‘Miley’ Walsh, now retired, was a docker at Dublin Port for 46 years from the age of 16. In that time, the work became increasingly mechanised, and dockers were obliged to obtain qualifications to operate a range of machinery, from two tons to eight tons, and from cranes to winches. He is presently an active member of the Dublin Dock Workers Preservation Society, which has gathered a wealth of photographs and documents recording the life and times of the dockers and their families.

Francis Devine, a retired trade union official, is author of Organising history: a centenary of SIPTU, 1909-2009, (2009) and A unique association: a history of the Medical Laboratory Scientists Association, 1961-2011 (2011). He is an honorary president, Irish Labour History Society, former editor, Saothar, and trustee, Working Class Movement Library, Manchester. He is a member of the Decade of Centenaries Advisory Group and member Comhairle Bhéaloideas Éireann – The Folklore of Ireland Council. He is also Contributing Editor of A Capital in Conflict: Dublin City and the 1913 Lockout, which was published by Dublin City Council in April 2013 to mark the centenary of the Lockout.

Joe Mooney is a community activist in the Dublin Docklands area and is a member of the East Wall History Group and the Adela Hare Centenary Commemoration Committee.

All in a Row – Charity Event

The “All In A Row” event was established by the rowing & boating community in 2016 in an effort to raise much needed funds for local charities. [...]
more

Teeming with life, both wild and human, the bay faces many challenges both natural and manmade. ‘An Cuan’ will explore this unique urban area where [...]
more

Stories From The Sea

Tadhg Mac Dhonnagáin in conversation with Cathal Póirtéir at The Pumphouse